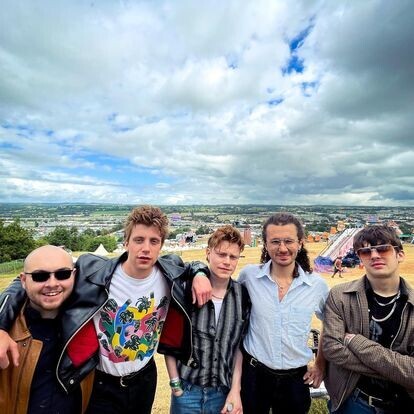 "Meet the five-piece band who are not only turning heads with the confident glide in their stride; they're literally bulletproof” - Paul Sexton (Sunday Times)

Hardwicke Circus are fast building a reputation as the most exciting band to emerge from the UK in recent years. Having gained a large internet following, and fans all over the UK through playing countless live shows, this band has what it takes to go all the way.

Watching them live only enforces this belief. Their sound brings comparisons with the brio of the E Street Band and the dark passion of classic Doors, but with plenty of British authenticity and perhaps even a hint of Dexy's in their high voltage attack.

Proudly based in the border town of Carlisle, Hardwicke Circus have played over 150 gigs this year - supporting Bob Dylan & Neil Young in Hyde Park, Madness, Alabama 3, Southside Johnny and The Asbury Jukes, Bob Geldof’s Boomtown Rats and The Blockheads. They have gigged at the legendary Isle of Wight Festival, Glastonbury, Reading & Leeds, headlined the Yam Riot Stage at Kendal Calling and gained airplay on BBC Introducing, Radio 1, Radio 2 & 6 Music. HC have recently completed a four month residency at the famous Hope & Anchor in London and have just released their third EP. In March 2020 they play the legendary South by Southwest Festival in Austin Texas, USA.

The first local band to sell out their hometown venue “The Brickyard” four months in advance, Hardwicke Circus have added a second night - playing two sell out hometown gigs back-to-back.

With every new show, more and more fans get on board, because this is a group where there's so much to watch as well as to listen to. The focal point of it all is lead singer and chief songwriter Jonny Foster, who draws the eye as he exudes all of the 'Brown Sugar'- era swagger of Jagger. But on stage and on record, there's also an echo of the energy of such modern-day heroes as Arcade Fire. “It's a very visual thing, and I think people like to see the seven of us on stage,” avows Foster. “You don't really find that in modern bands. I've always liked the big band and I always aspired to play in one, with cinematic songs. To have six people channel that same vision, I think we're really lucky.”

“Imagine The Rolling Stones creating an album with The Doors jamming with Primal Scream...This is Hardwicke Circus. Transforming their influences into their own originality, this night was one to remember for some time to come.”

"One the best gigs I've ever seen; raw visceral rock music, before it all got too damn perfect and corporate"

"Every so often a band comes along that has something special. This is a young band with talent to burn and huge potential"

Their ever expanding army shows no sign of stopping. 9pm.
Sign Up for news, offers and events