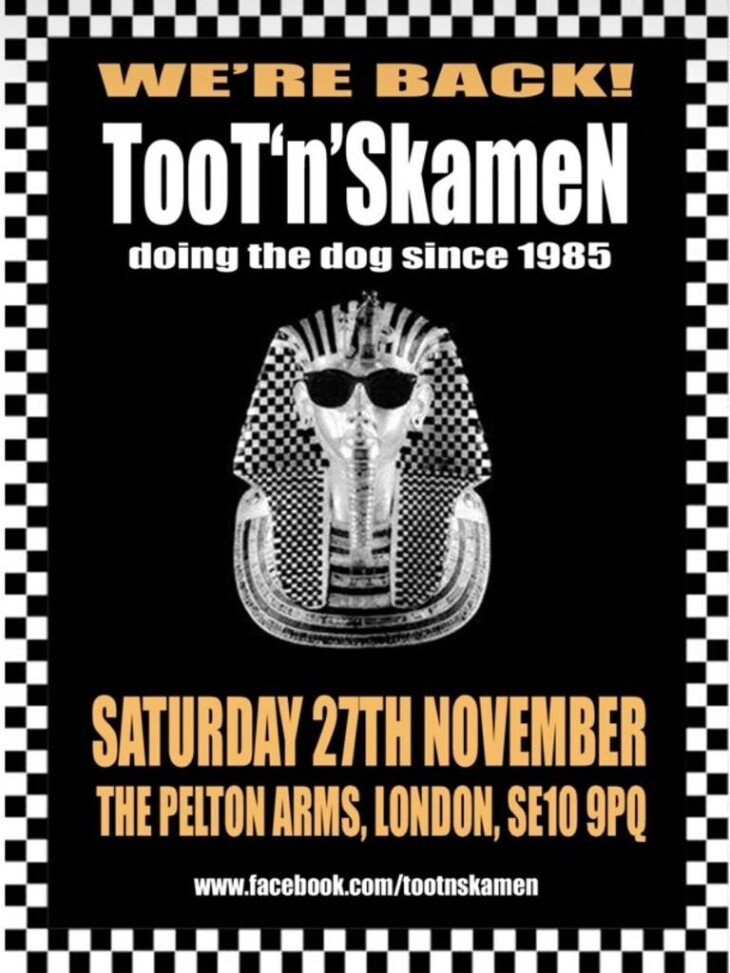 Originally formed in 1985 in Maidstone UK, Tootnskamen are now recognised as one of the country’s ultimate 2Tone and SKA tribute bands. Our diverse set includes hit material from Madness, The Specials, Bad Manners, The Selecter & much more, tunes which guarantee our audiences a truly memorable experience. We consistently headline festivals and have played support to many mainstream bands such as: Bad Manners, The English Beat, Aswad Selecter. Our audience of over 7000 Facebook followers pays testament to the quality, professionalism and sheer dedication of the band. Our talented band members have years of stage experience and are all professional or semi-professional musicians and singers: *Tim Wilcox* - Guitar/vox: Formerly of Mr Kite and The Hamelins. A lover or classic rock and roll whos influences mainly stem from 60s guitar based bands such as the Beatles and Jimi Hendrix. Fact: Tim’s first concert was the RHCP at Hyde park in 2004 when he was just 14. Unbeknown to him, two of the original Toots line up were also in attendance that day - some 14 years before they would ask him to join the band. *Leanne Paige* - Sax/vox: Leanne took her first steps into the world of music when she began playing the clarinet at the young age of 6 years old, training classically for a number of years. When she reached the age of 11, she began to play and fell in love with the saxophone - quickly moving over to the world of jazz, funk, soul, rock and pop. Leanne worked as a professional musician for 12 years and continued to freelance throughout her time at university where she earned her Bachelor's Degree in Performance and Production. Leanne recently made the decision to go into a different area of the industry and is now a full-time teacher of music in both primary and secondary schools. Leanne is a huge lover of safety pants, animals and spends her down-time hugging trees and wafting the house with sage. *Steve Welsh* - Bass/vox: One of the band’s founding members and with over 35 year’s gigging experience, Steve’s no-nonsense approach has been the basis that has seen the band move from strength to strength over the years. Steve was classically trained by Mark King off of Level 42 and continues to gig with Sinitta and the Cheeky Girls when his busy schedule allows. *Simon Lucas* - Lead vox: Mr L has been a member of Toots since 2009, Simon originally played drums with the Medway Punk outfit Armitage Shanks, releasing the album Takin’ The Piss in 1994. Later vocals and rock drums with various bands before forming Pondlife - a Blur tribute act. When not on stage or in the studio, Simon can usually be found walking his lurchers or riding a motorcycle. *Matt Wade* - Keys Matt started playing the piano at around 6 years old playing film tunes and popular music by ear. He started taking an interest in Classical music and Composition during his early teens and then tried taking music seriously with lessons but couldn't past any grades, lol. He played his first gig at 15 years old as backing keyboards for a professional function band. He decided to study music formally under his own instruction which inevitably lead him to Leeds College of Music to study Classical Piano and Music Production. During his University studies, he branched off into Jazz and decided to work towards becoming a diverse professional performing musician. With a wide-ranging repertoire under his belt, Matt has worked with a all sorts of musicians, performing as a musical theatre pianist, accompanist, classical pianist, to keyboard player for TooT'n'Skamen. He is a committed musician whom you'll find either practicing all hours of the day, teaching as a peripatetic or debating with idiots on social media. Matt first heaed of TooT'n'Skamen from Tim, who he worked with at the time, unbeknownst to him he would eventually join the band 5 years later. *Dustin Lee-Burgess* - Drums: A man of few words, a quality percussionist. Lifelong Manchester United and Ebbsfleet supporter. Played drums at the last supper. *Craig Geddes* - Sound engineer: "The Craig" First picked up the guitar at the age of 16, quickly realising that most people he uncounted would tell him to put it down again. Still wanting to be in any way associated with grass roots local live music he took a different route and started sound engineering. Which, he found was just a wonderful opportunity to ruin other people's performances. After many, many, many years Craig actually got kinda okay at sound engineering and went on to work with Chas and Dave which certainly got him noticed in the music industry. He finally got his lead with Toots by him having a friend who was in the band, which kinda stuck, because the drummer's brother didn't want to engineer the band anymore. So they reluctantly asked The Craig if he would have a go full time - and this is why the guys the longest running consecutive holder of Tootskamen's COTM award. His portfolio includes: The Selecter, Bad Manners, John Ottway and Dr Feelgood. 9pm
Sign Up for news, offers and events